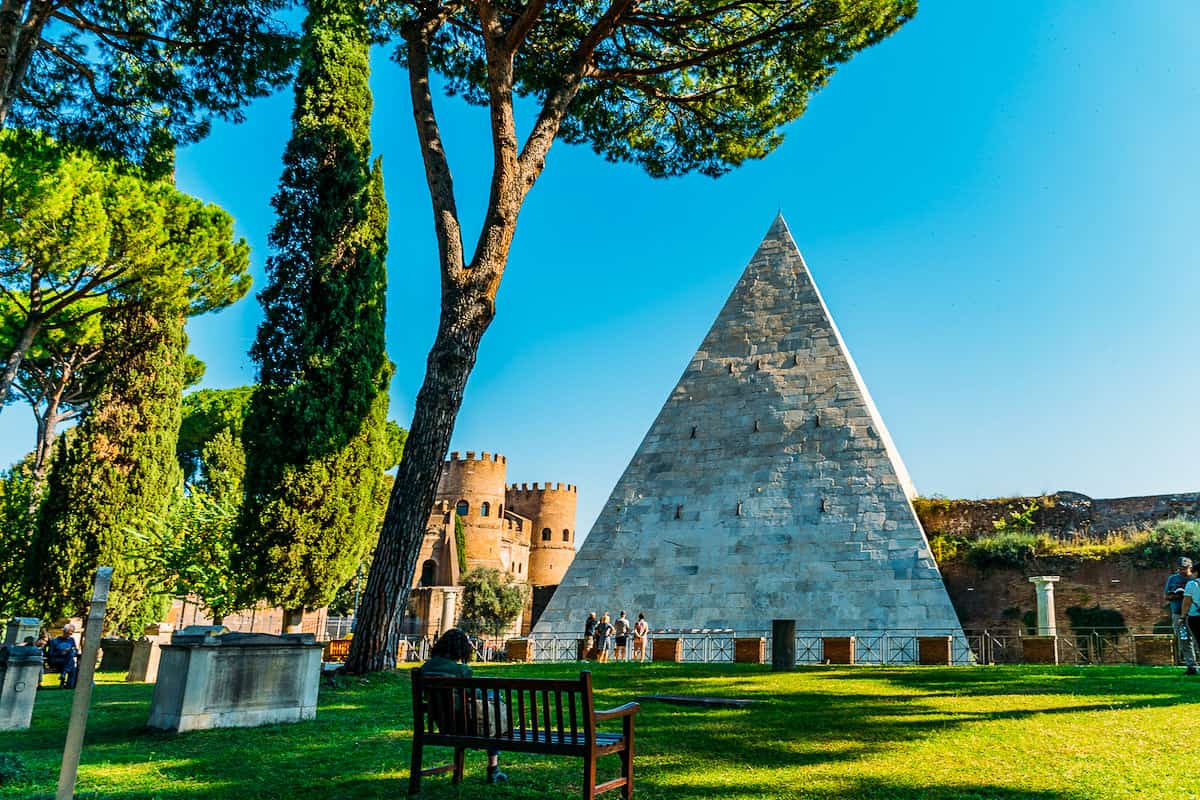 Testaccio is a historic district of Rome and during the time of Ancient Rome all of the food and oil supply was brought here from the port in terracotta pots. The shards of broken terracotta pots were discarded and over time the build-up of 53 million pots created Monte Testaccio Hill which is at the centre of the Testaccio neighbourhood. The residents and businesses of the neighbourhood are so proud of their history that some of the restaurants even have little windows built into the walls that show off the unique hill. It is an area that has had many lives, it was the industrial district, it has been the Jewish quarter, and now it is where the locals live their lives away from the hustle and bustle of the historic centre of Rome.

For visitors to Rome who aren’t interested in the shopping, or being surrounded by chain hotels, Testaccio is the best place to stay. You will be surrounded by little tavernas, fresh food markets, tiny bakeries. There will be local bars, delis, and shops selling local wine and sweets. It is only a short walk away from the historical centre yet the working class district has retained the feel of a small Italian village located in the heart of the busiest city.

What Testaccio is known for though is the traditional Italian food. Think tiny Italian delis, local markets, and tiny trattorie that jealously protect their traditional recipes that have been handed down through the generations. While staying in Testaccio you will see Italian Nonnas climbing the hill, backs bent under the weight of the fresh food they purchased at the local market. You’ll see children playing on the street and old men sitting around discussing the week’s events. Testaccio is the place to stay if you want to get a feel for authentic Roman life.

What To See And Do In Testaccio

–Look out for famous graves at the Non-Catholic cemetery.

Being such a bizarre thing to see in Rome, the pyramid is a must see for people staying in Testaccio. In 12 BC a magistrate decided he wanted his final resting place to be special so he arranged for a pyramid to be built. He threatened his heirs with being written out of his will if it wasn’t constructed as quickly as possible and so it was built in just 330 days. Located right near the Non-Catholic cemetery, visitors can make a macabre afternoon of it. The interior is only open on Saturdays from 10am to noon so a trip must be planned accordingly.

-Wander through the worn streets of the Jewish Quarter.

Rome’s Jewish Quarter lies just on the edge of Testaccio and is a destination within itself. There is so much life here with pokey little stores on every corner selling just about anything and the chatter of the residents filling the streets. Stop by the bakeries or restaurants to sample some unique Roman-Jewish cuisine.

-Dance the night away at one of the nightclubs carved into the hill.

Nightclubs in Rome don’t really get going until midnight but clubbing in Rome is an experience you won’t forget. There is live music or guest DJs and the party continues until the early hours of morning. Akab or L’Alibi are the best ones in Testaccio.

-Visit the most unique Art Gallery at the Mattatoio Modern Art Museum.

Housed in the old slaughterhouse of Testaccio the Mattatoio Modern Art Museum is one of the major attractions of this neighbourhood. The art housed here is experimental and incorporates the history and features of the building. There are still meat hooks hanging from the rafters and outside the animal pens have been filled with plastic chairs and a small bar. Being one of the most atmospheric galleries in the world, it is a must see for art enthusiasts.

Open every day, this locally owned shop is the only place to go to procure the highest quality meats and cheeses. Ask any local where to buy meats and cheese and they will point you to this deli. Perfect for preparing meals or for grabbing bites for a picnic lunch, Volpetti Salumeria must be top of your list. While here be sure to stop by Taverna Volpetti which serves cold cuts on slabs of slate or simple seafood pasta. The low fuss menu is big on flavour and authenticity.

What To Eat And Drink In Testaccio

A small little kiosk tucked away in a park, Tram depot is certainly a hidden gem. They have plenty of outdoor seating available so you can rest your feet and people watch while sipping on coffee. In the evenings it becomes a bar with wine, spirits, and espresso based cocktails available.

-Eat the best cacio e pepe in Rome at Felice.

This little restaurant has been open since 1936 and is still one of Rome’s most famous restaurants today. It can get really busy so it is best to make a reservation in advance. In an otherwise meat heavy Testaccio, Felice offers plenty of vegetarian dishes.

-Have Roman Fast Food at Trapizzino.

Named after their most popular dish, a pizza dough sandwich stuffed with fillings, Trapizzino offers quick, cheap eats in Testaccio. They have a rotating seasonal menu of trapizzino and suppli (fried rice balls).

-Try some of the traditional dishes at Mordi E Vai.

Because of this district’s deep history with the now closed slaughterhouse, offal dishes are still quite popular in Testaccio. In the past the slaughterhouse workers were given offal and the cuts of meat that were usually thrown away and so some ingenious recipes were borne. That they still exist is testament to how amazing they are. Mordi E Vai is a food truck at the local market that sells neighbourhood classics, prepared by an ex-butcher.

-Have a slightly lighter meal at Ketumbar.

For the cost of €10 you can get a cocktail and access to the vegetarian buffet for an aperitivo meal. There is a selection of salads, grains, bruschettas, and meat substitutes. The food is packed with flavour and great value for money. On weekends they do a brunch buffet for €18 excluding a drink where you can load up on heavier lunch foods to fuel your day’s explorations.

-Eat at one of the family run trattorias.

Trattorias are the backbone of Testaccio. Small, single room restaurants with paper table cloths and multiple family members serving and cooking, there is nowhere better to get food in Rome. Dishes will be packed with flavour from ingredients bought at the market, and your waiter will be able to tell you exactly what to get if you are ever at a loss. The menu will be seasonal and packed with local dishes. Think gnocchi in oxtail sauce, and ricotta and cherry tarts. There are so many to choose from but some of the best are Piatto Romano and Perilli.

-Grab a pastry and a coffee at Pasticceria Linari.

This family run bakery is always packed but it is worth fighting your way through the crowds to get your hands on one of their amazing cornetti or pizza rossa. They are open in the morning but if you head there after lunch they have many traditional sweets on offer as well.

No trip to Italy would be complete without Gelato and Panna & Co offer some unusual yet delicious flavours. They also offer plenty of vegan flavours for those who aren’t a fan of dairy. Open until 11.30pm, it is never too late to pop in for a sugar fix.

The menu is full of classic cocktails with a local twist. For example gin gets an Italian makeover in the cocktail Smash with lemon and basil leaves packing a flavourful punch. Other popular drinks are the Testaccio Mule and Amaro Sour.

Where To Stay In Testaccio

Located right in the heart of Testaccio this guesthouse has an Italian countryside cottage feel to it. There is a hot tub to relax your sore feet after a day of exploring and the Wi-Fi is fast enough to post all the pictures you took to social media. There are rooms big enough for families, a rarity in Rome and the décor is comfortable but no frills.

This tiny hotel is a work of art with golden gilding and rich reds used as the base of decorating. There is very little in the way of common areas and no restaurant or spa onsite, but the rooms are larger than most in Rome. Aimed at couples wanting a romantic holiday, higher room types have four poster beds and private balconies or bathtubs with whirlpools. There is a small breakfast room where a buffet breakfast is served every morning but guests have the option to take breakfast in their room at no extra cost. For the convenience of guests there are smartphones in every room with maps, and articles with suggestions of restaurants and things to do.

If you want somewhere with a kitchen: Hotel Re Testa

Even though there is so much good food to sample in Testaccio and the surrounding neighbourhoods of Rome, sometimes it is nice to have a kitchen to prepare breakfast or to make the holiday more cost effective if you are staying in Rome for a while. All the rooms at Hotel Re Testa have basic kitchenettes with a stove, microwave, fridge and sink. All the rooms also have large balconies so you can people watch while enjoying a cup of coffee or glass of wine. If you select a deluxe room some of them even have a hot tub on the balcony. There is a selection of studio or one bedroom apartments depending on your needs and all of the rooms are airconditioned – a must for visits to Rome in the summer!

If you just want somewhere to lay your head: Hotel Santa Prisca

Like most of the hotels in Rome, this hotel is boutique with only 50 rooms. It is a 2 star hotel offering basic facilities for guests who will spend most of their time out exploring anyway. Public areas and rooms are airconditioned and have sufficient Wi-Fi service. For convenience there is free onsite parking for guests and a courtesy shuttle into the historical centre of Rome. There is a small restaurant onsite offering some standard Italian dishes and the bar and front desk are open 24 hours a day. This hotel has some spacious family rooms on offer which can accommodate up to 6 people.