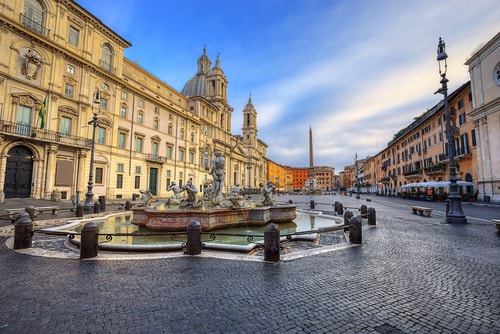 There are many fantastic sights to see in the popular Italian city of Rome, from Vatican City to the Colosseum and much more. But it might surprise you to know that one of the most interesting and photogenic sites to visit is not a building or other large structure but rather a public square — the Piazza Navona, which has been a gathering place since the 1400s.

Famous film directors have used the beautiful square as a shooting location and once you arrive it’s easy to see why. Created in an oval design, it features three stunning fountains, a large obelisk from Roman times, fantastic architecture of the surrounding buildings done in the Baroque style popular from the 1600s through the mid-1700s, and more.

And beyond the historical elements of the square, it’s simply just a great place to visit to get a sense of everyday Rome. You’ll see locals hanging out at the high-quality but affordable cafes and restaurants surrounding the square, and plenty of other attractions. Check out the guide below for everything you need to know about visiting this unforgettable place.

The reason that the plaza is built in an oval shape is that it is the site of the former Stadium of Domitian, which dates back to 1AD and was shaped as an oval as most stadiums are. It was used during Roman times for athletes to engage in sporting contests, including gladiators in 217AD. But as the years went on the building fell into disrepair. It was later used to provide housing to the city’s poor, and eventually designated in the late 1400s as a square for the public.

It’s at this time that many of the famous Baroque buildings in and around the square were erected, as was the trio of fountains that remain such a draw for visitors today. The entire area was covered in paving stones that are still in place and help make it such a picturesque spot.

Timing Your Visit To Piazza Navona

The ideal time to visit Piazza Navona will depend on what kind of experience you are looking for. Many people across the world know the square from movies like “Angels & Demons” and “National Lampoon’s European Vacation” and therefore it draws a large crowd throughout the day from tourists eager to explore a place that they have seen on the cinema screen.

Crowds are typically at their peak from roughly 10am through to 5pm and then its pick up again until about 8pm. At all other times you should be able to experience fewer people, so you’ll get a good sense of the exciting energy of the square without being overwhelmed by crowding.

Getting To The Piazza Navona

Depending on where you are staying in Rome, the easiest option for getting to the plaza is probably walking. If you’d like to go on foot then simply look up the square on any GPS app or online and follow the directions to get there and back from your hotel or other accommodation.

Many tourists visit the square by using a ticket on tour buses that allow you to get on and off their routes whenever you see a spot you’d like to check out. These buses are designed for tourists and pass by most of Rome’s major landmarks, including the Piazza Navona. Check out bus tour companies in advance to find a good price, as most stop very close to the plaza.

If you’re interested in using public transportation to get to the square, unfortunately the Metro subway system does not have a nearby stop. You can get as close as Piazza Barberini on the Metro but that station is still roughly a 15 to 20 minute walk from the square.

But if you’re willing to take the public bus then there are several routes that will call at the square, and have fairly frequent service at much lower prices than taxis.

Check Out The Three Fountains

Once you’re at the square your eyes will immediately be drawn to the three fountains and obelisk that command a lot of the open space. Get your camera ready for taking memorable Instagram-worthy pictures with these gorgeous monuments that are rich in history.

At the center of the three fountains is a large obelisk dating back to Roman times that features sculptures that are inspired by four great rivers of the world: the Rio de la Plata, the Danube, the Ganges, and the Nile. This quartet of icons looks over the trio of fountains.

The first fountain is called the Fontana del Moro and was built in the 16th century and then updated in the 17th century to add the depiction of a Moor tangled in a fight with a dolphin.

The second fountain is called the Fontana di Nettuno and was also built in the 16th century, and was updated in the 1800s with the addition of a statue of the Roman god of the sea Neptune.

The third fountain is called the Fontana dei Quattro Fiumi and was built in the 17th century and designed as a tribute to the Italian pope. Among the interesting features you can see on the fountain are a dove, the pope’s coat of arms, and an olive branch.

Visit The Church Of Sant’Agnese In Agone

Another important historical and religious landmark within the Piazza Navona is the Church of Sant’Agnese in Agone. Although it’s believed that there was a church in the square in AD300, the current building dates back to the 1600s. Built in the Baroque design, it features very elaborate architecture across both the exterior and interior. Once you walk inside you will find almost countless examples of priceless religious artworks depicting scenes from the Bible.

Other Things To Do In Piazza Navona

It can also be a fun trip to simply walk around the plaza and then enjoy some refreshments at one of the many excellent drink and dining establishments nearby.

Sometimes you might also find some street artists with their easels out painting, and you can typically purchase posters and other creations from them as mementos of your holiday.