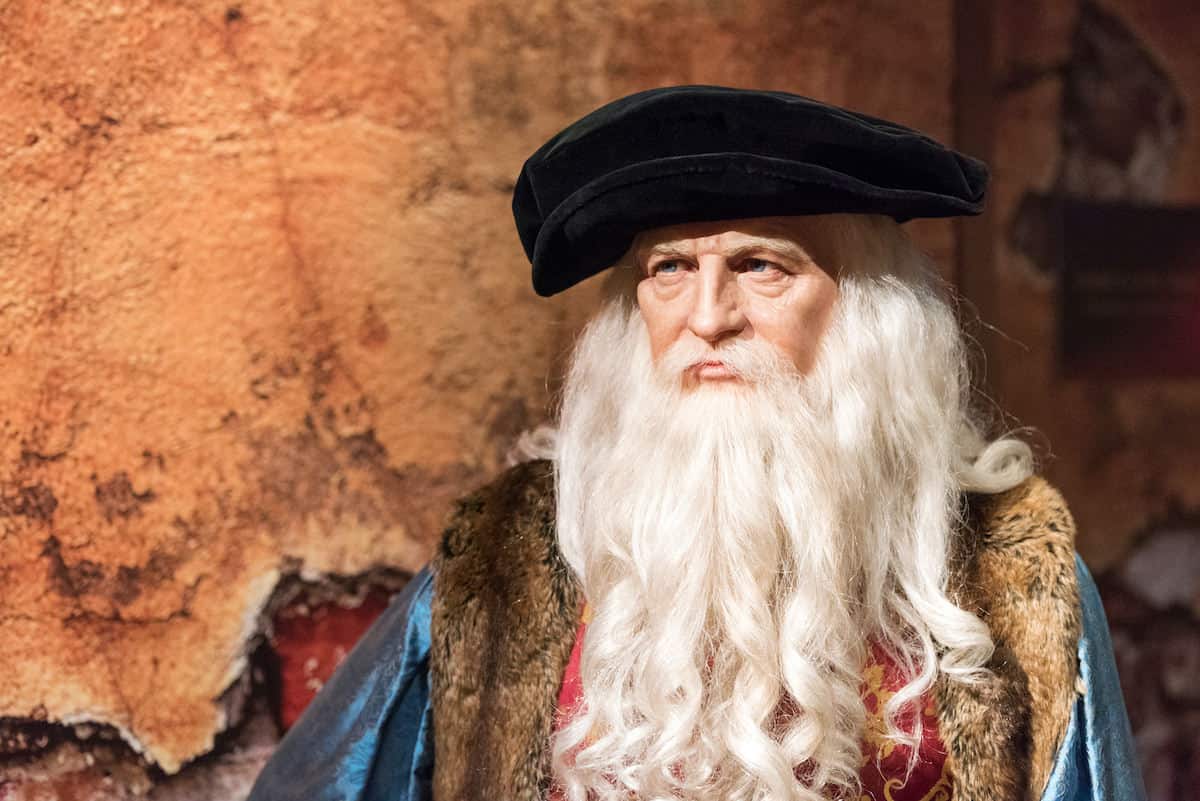 Everything You Need To Know About The Italian Polymath

Everywhere you look in Italy you will find tributes to Leonard da Vinci, one of the country’s most famous citizens. Airports like Rome Airport Fiumicino, public buildings and more are named after him. His paintings like the renowned “Mona Lisa” continue to draw praise centuries after their creation. And some of his groundbreaking inventions are reflected in present day technologies.

Born in 1452, da Vinca is often referred to as a polymath — someone whose great knowledge covers many different subject areas. In the 67 years he lived, until his death in 1519, he delved into a host of topics and interests including science, architecture, anatomy, engineering and several types of art ranging from sculpture to drawing and painting.

It’s generally believed that da Vinci was born in 1452 on either April 14th or 15th in a town called Vinci located in the hills of Tuscany in Italy. His parents were not married; his father was a rich legal notary in Florence called Messer Piero Fruosino di Antonio da Vinci and his mother was believed to be a young poor woman called Caterina, who may have been a slave.

Da Vinci was not raised by his mother and instead was brought up by his father along with his stepmother, relocating to live on the estate owned by his father at the age of five.

His interest in education on a wide range of topics started at an early age, though before his teenage years he was given only basic teaching in courses such as reading and writing. But his life would change once he turned 14 years old and started an apprenticeship.

The apprenticeship took place in a workshop operated by the Italian sculptor and painter Andrea del Verrocchio, based in Florence. Da Vinci began his work as a studio boy but showed a talent for art, being formally named an apprentice when he turned 17 years old. This started what would become a seven-year training course in a wide range of artistic skills.

During his time in the workshop, da Vinci is said to have painted key elements of a classic Verrocchio painting called “The Baptism of Christ” — there is a story told about this work that is believed to be a myth. Da Vinci is said to have painted the image of an angel holding on to the robe of Jesus that exceeded anything Verrocchio had ever done before, and this prompted Verrocchio to never paint again. Although scholars generally doubt that this actually happened, it highlights the early promise that da Vinci exhibited in the artistic field.

Once da Vinci turned 20 years old, in 1472, he was entered into a group of medicinal doctors and artists known as the Guild of Saint Luke. Being a member of the guild was a necessary step before an artist could sell their creations in public, and therefore it was extremely important for da Vinci to become a member or “master” of the guild in order to sell his art.

It’s believed that one of the first independent works of art he created is a drawing made with ink and pens in 1473 of Florence’s Arno valley.

In 1842 da Vinci had several important projects in the works, including what would become the unfinished “Adoration of the Magi” painting at the San Donato a Scopeto monastery in Florence. But nevertheless he decided that year to move to Milan to work for the duke of the city. It was an unexpected changes, but led to a very prolific period for his artwork.

During this time he painted the world-renowned “The Last Supper” for the Santa Maria delle Grazie monastery, among other pieces. He was commissioned for a large range of other paintings, sculptures and additional work for the next 17 years.

It’s also in this first Milanese period that da Vinci started to pursue his many other interests, including advising on architectural and engineering issues for the military.

Toward the end of his first time in Milan, da Vinci had been working on a massive equestrian monument of bronze that would have been the largest such structure in the country. But when the King of France Charles VIII attacked the city in 1494, da Vinci gave the bronze material for the project to Milan so that the city could use it as a cannon to defend itself.

The French ultimately won the battle for Milan and it’s though that in either late 1499 or early 1500, da Vinci returned to Florence after first stopping off in Venice.

His native area welcomed the man back when he returned in mid-1500, and soon after he was named as an expert on architecture to assess the statues of the San Francesco al Monte church. Observers at the time said that da Vinci appeared more interested in technical topics like mathematics rather than the art that had enthralled him previously in Florence.

Da Vinci was then enlisted by Pope Alexander VI’s son Cesare Borgia to assist as general engineer to help the papal army expand its control. Da Vinci was responsible for traveling the country and creating sketches of areas including maps, which many people believe to be some of the earliest hints at what would eventually become cartography used present day.

In 1503, da Vinci left the service of Borgia’s army and went back to his native Florence where he once again became a member of the Guild of Saint Luke.
This period is incredibly important in his life because in October 1503 he started work on a portrait painting of the Italian noblewoman Lisa del Giocondo, who would become the model that he used for the iconic “Mona Lisa” that he worked on until close to his death.

In addition to his artistic endeavors, da Vinci also focused on technical breakthroughs during this second period in Florence. For example, he helped to plan out a canal that would provide a direct connection between the city and the sea and avoid the need to tackle part of the Arno River that could not be navigated. Although the plan was ultimately never enacted, in modern times a highway for vehicles was built over the same route the canal would have taken.

Medical learning was also a prime focus of this period of da Vinci’s life in Florence, including studying anatomy, dissections, and related topics. He was also an avid student of wildlife and nature at this time, conducting research on water, birds, and more.

Da Vinci would return to Milan several years later in early May 1506 at the request of Governor Charles d’Amboise who controlled the city at the time.
His work during this time in Milan largely consisted of helping the local government with engineering and architectural projects such as ways to connect the city with Lake Como. It was not a productive time for da Vinci as an artist and there are few major works that he is known to have made during this second time living in the city.

Even the creative projects that he did take on were not always completed — the celebrated French army marshal Gian Giacomo Trivulzio had requested that da Vinci design the equestrian sculpture for his tomb, but despite the work da Vinci put in, the marshal chose another design.

Da Vinci’s interest in the field of medicine also continued during this time, with in-depth studies of human organs and the body, including extensive study of anatomy.

He also showed a growing interest in the spiritual, such as an emerging belief that all inorganic and organic forms are connected through motion and force.

In 1513, da Vinci would have to move from France again when the French that controlled it were expelled temporarily. He spent the next three years living in Rome, accompanied by assistants and students. During this time da Vinci made several drawings for a proposed massive residence for the Medici in Florence but the building was never constructed.

In 1516, when da Vinci was 65, he was invited by French King Francis I to leave Italy and move to France and work for the royal — an invite that he accepted. He moved to a manor house called Clos Lucé, located near the king’s residence, where he worked on his many projects.

These were da Vinci’s final years and it’s during this time that Francesco Melzi, one of his apprentices, drew a sketch of the polymath that is one of very few known to exist.

Da Vinci himself did not undertake much artwork during him time in France and instead focused on his studies of scientific topics, including medicine and the human body. It’s thought that one of the reasons he was unable to do much painting at that time — including work on the “Mona Lisa” — is because his right hand might have been paralyzed by a stroke.

Eventually da Vinci became gravely ill and died age 67 years old on May 2nd, 1519. The cause of death is believed to have perhaps been a stroke. He was buried at the Saint-Florentin church near the manor house in France where he spent his final years. During the French Revolution the church was destroyed and it is now impossible to find da Vinci’s grave. 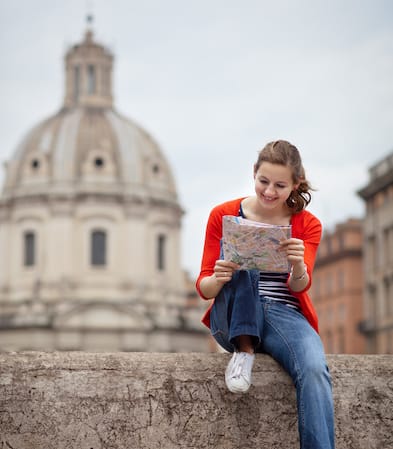