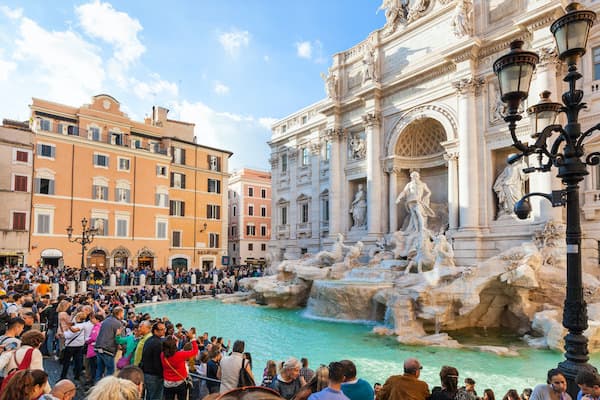 All You Need To Know About Rome’s Trevi Fountain

Italy’s capital city of Rome has some of the world’s best historical attractions with instantly recognizable icons like the Colosseum, the Pantheon, and St. Peter’s Basilica. But while those huge structures attract millions of tourists every year, some of the smaller famous landmarks are worth a visit, including the incredibly popular Trevi Fountain.

Located in the city’s Trevi district, work on the first iteration of the fountain was formally completed with its inauguration in 1762. It’s a large, eye-catching work of art with impressive sculptures that pay tribute to ancient Rome. The total size of the fountain is huge, spanning a height of about 86 feet (roughly 26 meters) and a width of about 161 feet (49 meters). It’s primarily constructed from Travertine, a type of stone from a quarry by Tivoli in Italy.
As with any tourist attraction in a foreign country, it’s useful for visitors to know important facts about the Trevi Fountain including whether it’s allowed to dip your feet in the water, how to toss coins into the fountain, and what there is to see and do in the area around the fountain. Check out the guide below for top tips to make the most of your trip to the Trevi Fountain.

Creation Of The Trevi Fountain

Trevi Fountain is located where three busy streets meet, so it’s in a naturally busy area. The location also marks the end of the line for one of the main aqueducts used to provide water in Rome’s ancient times. Many centuries ago there was a smaller and less elaborate fountain built on the suit, but Pope Urban VIII decided in 1629 that it needed to be replaced.

The pope thought that the site deserved a fountain with a much more intricate and impressive design and commissioned Italian architect and sculptor Gian Lorenzo Bernini to draft ideas for a possible replacement fountain. Initial progress was slow, and then when the pope died in 1644 the concept was almost completely forgotten for many decades.

But in the 1800s there was a growing momentum for contests where governments would ask designers and others to compete with ideas for new public buildings. Pope Clement XII in 1730 launched such a competition for the fountain site, and the Italian architect Nicola Salvi was eventually declared the winner with his Trevi Fountain design.

Construction on the fountain started in 1732 and was not finished until 1762, 11 years after Salvi passed away. Other artists and sculptors finished the work by mostly keeping to Salvi’s original design but making some modifications. Once work was completed, Pope Clement XII held an event on May 22, 1762, to open and officially inaugurate the fountain.

What The Trevi Fountain Depicts

Tourists can spend a long time looking at the fountain and its sculptures of Roman icons and other features large and small, with plenty to discover just by admiring it.

The fountain sits in front of the centuries-old Palazzo Poli, a famous palace from Italian history. Visitors to the fountain will see several figures standing atop what look like rocky outcrops, with water splashing down the sides. The overall theme of the fountain is “taming of the waters,” and it pays tribute to the control that the ancient gods were said to have over the seas.

In the center of the fountain is the main statue, which is of Oceanus, a god who was said to control all the waterbodies of Earth and to personify the world’s oceans.

To either side of Oceanus you will see a sculpture of a mythical creature called a hippocamps that blends the images of fishes and horses. One of the hippocamps looks to be in a fury, while the other appears calm, and this meant to reflect that fact that the seas can vary in intensity.
On Oceanus’ left side you can see a statute holding plenty of fruit in a basket; this is meant to represent Abundance. On to the right of Oceanus you will see a statute of a female wearing a wreath made from laurels; this is meant to depict health, also known as Salubrity.

Don’t Get In The Water Of The Trevi Fountain

Because the fountain is such an important part of Rome’s history and draws millions of visitors every year, there are restrictions in place designed to help preserve it.

You are not allowed to get in the water at all, and police monitor the fountain to catch anyone that tries to do this. Similarly you can be caught and fined for consuming food or drink by the fountain, as well as sitting on its edge. All of these activities come with fines up to €500, so it’s much better and cheaper to simply enjoy the fountain from a sensible distance.

Tossing Coins In The Fountain

Although you are not allowed to step into the fountain, you are allowed to toss coins into the water. This is meant as a good luck gesture and became popular internationally after it was depicted in the 1954 movie “Three Coins in the Fountain” — and now people travel from around the world in order to make a wish when throwing a coin in the fountain.

Although you can throw a coin in however you’d like, what’s considered the correct way to do it to first stand with your back to the fountain. Place a coin in your right hand and then throw it over your left shoulder into the fountain. This is said to guarantee that you will come back to Rome in the future. Then take another coin and repeat the process, and this step is meant to help you find love. A third coin is meant for luck that you’ll marry someone from Italy, although you can also make whatever wish you would like with this coin.

However, you must never try to take any of the coins out of the fountain because this is against the law and could get you a fine or even a more severe penalty.

The money that people throw in the fountain is collected and used by a charity called Caritas Rome for beneficial projects for local people who are either homeless or living on low incomes. It’s said that an average of €3,000 is thrown in the fountain each day.

How To Get To The Trevi Fountain

It’s fairly easy to get to the fountain no matter where you’re staying in Rome. Cars are not allowed on the fountain square but can drop you off at a nearby location, so if you’re driving yourself or taking a taxi simply ask them to take you to the Trevi fountain.

Public transportation is also a good option for getting to the fountain, with several bus routes stopping nearby. You will want to get off the bus at the stop for via del Tritone/Fontana di Trevi, which is located a short walk from the fountain square.

If you decide to ride the Metro then you need to take the red line A and get off once you reach the Barberini station. Then it is a short walk down a street called via degli Avignonesi, turning on to via in Arcione, and then switching to via del Lavatore that will lead you to the fountain.

Because the fountain is such a popular landmark you can expect to see a lot of people throughout the day, although some parts of the day are quieter than others.

The peak for crowds is between 12pm and 7pm, so if you visit outside of these hours you are more likely to see fewer people. However, note that the city occasionally cleans the fountain and that this takes place between 6am and 10am on the days that it occurs.

If you have the time to see the Trevi Fountain during both the day and night then you should do so, because its appearance changes as the day goes one. In daytime you’ll be able to marvel at all the intricate features, while at night it looks captivating lit up. Both times will create a wonderful backdrop for a great photo to remember your trip to Rome.

Things To See And Do Around The Trevi Fountain

If you’re like to learn more about the history of the aqueduct that used to terminate at the site of the fountain, there is a museum nearby that delves into this story.

The museum, called “La Città dell’Acqua,” displays the original location of the water from the aqueduct that was used for the first version of the fountain. For a small entry fee you can also see items from ancient Rome, as well as remnants of some houses from that era.

There are also several cafes and other dining and drinking establishments located near the fountain where you can get something to eat and drink. Italy is renowned for its pasta and many of the businesses around the fountain serve good meals, although prices are slightly elevated because the owners know they can generally charge tourists more in such a busy area.