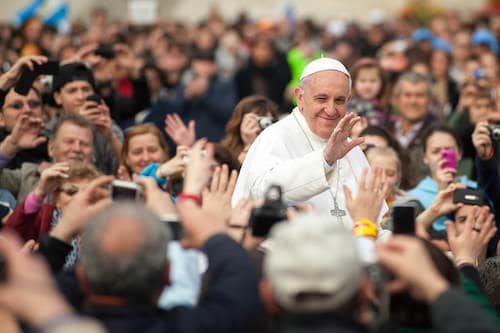 How To See The Pope In Rome


When you plan a trip to Rome, one of the questions that should be at the top of your list is Will I get to see the Pope?

The Pope is one of the most popular and visible figures in the world, yet he is often the most difficult to see in person. If you are lucky enough to catch a glimpse of the Pontifex, it will surely be the highlight of your entire trip. So how do you score a sight of the Pope (and hopefully his Pope-mobile) one your next trip to Rome? With a little bit of planning and a whole lot of luck, you may just have the chance to see the Holy Father himself!

Who is the current Pope?

First off, a little back story on the Pope. The Pope’s role and position trace their history all the way back to Simon Peter, one of Jesus Christ’s twelve disciples and a leader of the early church. Also known as the supreme pontiff, the Pope is the bishop of Rome and leader of the Catholic Church.] Since 1929, the Pope’s official residence in the Apostolic Palace in the Vatican City, a nation-state unto itself nestled within the confines of Rome, Italy.

The current pope is Francis, born Jorge Mario Bergoglio, who was elected on 13 March 2013. Pope Francis’s engagement in diplomacy, climate change legislation, and sexual abuse has helped rocket him to worldwide popularity. It’s no wonder that millions make a personal pilgrimage to see him every year!

How To Hang With Francis

If you are hoping to catch a glimpse of Pope Francis on your next trip to Rome, here are a few tips on how to ensure that you see the Father himself.

Tip One: Make Sure He’s Actually At Home

It can seem as though Pope Francis is always cozied up in the Vatican, but he is actually a pretty busy man. The Vatican’s own website has an up-to-date calendar of the Pope’s travel schedule that reaches almost 2-3 months in advance. When you sit down to plan your trip, make sure to jump over to the site and check to make sure that his schedule has him in Rome during your visit.

Insider Tip: There’s An App For That. The Pope App is a mobile app that you can download to learn more about Pope Francis, his role and engagement worldwide, as well as his upcoming travel schedule and appearances in the Vatican!

Tip Two: Know How To Find Him

Once you know that Pope Francis is expected to be in Rome during your visit to the Vatican, make sure you know where and how you will be able to see him. Throughout the year there are several observances, holidays, and special events where the Pope is present and often speaks:

Tip Three: What To Expect When You’re Expecting…The Pope

The easiest way to ensure that you have a chance to see the Pope in person is to attend a Papal audience or Mass. The Papal Audience is held every Wednesday that Pope Francis is in Rome. The audience typically begins around 10 or 10:30 AM and lasts for an hour to an hour and a half. Tickets are required, and even those who arrive early aren’t guaranteed to get in to see the Pope.

While the Papal Audience is not a Mass it does include some religious elements that you will definitely find inspiring. Often the Pope will give an address in Italian, as well as a variety of prayers, homilies, and times of singing. Many times Pope Francis will meet with those gathered for the audience and bless artifacts and articles such as rosaries and Bibles.

The Papal audience is not a Mass. It is an opportunity to listen to the Pope give an address in Italian, followed by prayers, a homily, and perhaps some singing.

On Sundays, you can often catch Pope Francis during the Sunday Angelus in Saint Peter’s Square. Appearing from a small window of the Papal apartment, the Pope will give an address to the crowd gathered below and will pray and bless those in attendance. Should he desire, he will often come down and greet those gathered. Unlike the Wednesday Papal Audience, the Sunday Angelus does not require tickets, but the same advice on arriving early should be heeded!

The Pope is also often present at many masses in churches in and around the Vatican, and are actually quite easy to get tickets to attend them! Many of these are normal Catholic Masses that are led by Pope Francis.

Another great option is to try and be in town for a Holiday Mass, which is a special Mass that centers on a particular holiday in the Catholic calendar. These are incredibly popular and will be much harder to get tickets to than the ordinary Papal Masses.

For any of the above options, the key is to plan smart and early – many times you may need to get tickets months in advance for a chance to attend one of these ceremonies.

Pro Tip: Get Some Advice From Your Local Priest or Bishop

Did you know that most of your local Catholic priests or bishops have spent time training in the Vatican? Many of them have even spent time learning from the Pope himself! If you are interested in learning more about how to see Pope Francis, what to expect when you go to Rome or the Vatican, and some insider tips on how to catch a sight of the Father, feel free to reach out to your local Catholic leadership!

You never know who may have that exclusive hookup you are needing to see the Pope in person on your next visit to Rome!

Have you seen the Pope on a visit to Rome? Drop a comment below to give your own tips and tricks, as well as your own experience seeing him! One day in Rome Top Things to See & Do Testaccio neighborhood
Scroll back to top